The Irish Women’s Hockey squad has been selected ahead of the Humidity Tour.

At the end of March, the SoftCo sponsored team will travel to Durban, to go head to head with teams from countries such as China and Japan.

SoftCo ambassadors, Captain Katie Mullan and Goal Keeper Ayeisha McFerran will be joined by 19 others to play eight matches in South Africa. 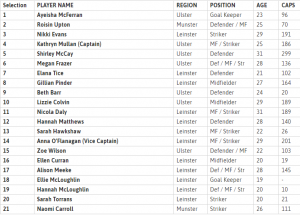 Head Coach, Sean Dancer spoke to Hockey Ireland and commented that the chosen team is “very balanced”. They’re also looking forward to the return of Megan Frazer after a long rehab period and the addition of Ellie McLoughlin. The coach stressed the importance of the period for the team as they take on “humid conditions” in South Africa.

We are wishing the team the very best of luck for the tour.