SoftCo sponsored Ireland Women’s Hockey Team have secured their second successive World Cup appearance after beating Wales 3-2 in the Final of the European Qualifiers in Pisa. The win cements their place at the 2022 showpiece taking place in Holland & Spain in July 2022.   Ireland made it through to the final of the qualifier tournament by beating Belarus 3-2 in Saturday’s semi-final, after easing past France in their opening game.

“What just happened here is a huge moment for the legacy of this team, continuing to build on the success we have already had,” Captain Katie Mullan commented.

“We knew it would be a defining moment. It wasn’t pretty but it shows the character within our group to come away from the game with a win from such a tough battle. Credit to Wales, they put on a big performance and took us right to the end.”

The tournament followed a grueling schedule in 2021 with June’s European Championships followed by the Olympics and then less than 12 weeks to regroup with a new look panel for this competition. 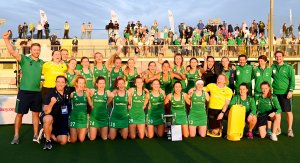 “We’ve played three tough tournaments in one year at international level with the Euros, the Olympics and this qualifier. It is pretty unheard of so it was always going to be a tough ask after the Olympics to bring the group back together to come here and do the job. This group needs to be going to major tournament after major tournament. This was the first roadblock after 2018 and this is a massive achievement. It may not seem like it is bigger than some of what we have done in the past but, for our sport, to continue to grow the way it has and to continue to inspire the next generation, it was so important for us”