What is Robotic Process Automation and How Does it Affect Accounts Payable?

As organizations continue to look for ways to reduce costs and improve efficiencies, one particular technology that is growing in popularity is that of Robotic Process Automation (RPA).

As organizations continue to look for ways to reduce costs and improve efficiencies, one technology that is growing in popularity is robotic process automation (RPA) in accounts payable. According to a recent report by Deloitte, 78% of organizations surveyed are already implementing robotic process automation, and another 16% plan to incorporate RPA into their invoice processing and AP automation strategy in the next three years. This adds up to near-universal adoption within the next few years. 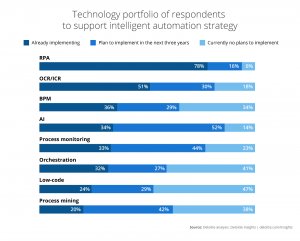 Robotic process automation is robotic-like software that replaces humans to automate repetitive, rule-based tasks, and processes. By interacting with existing IT applications, RPA software captures, interprets, and then automates recurring tasks continuously. With a digital workforce in place, employees are then free to dedicate more of their time towards customers and other higher-value tasks.

Robotic process automation can get put on the back burner because the tasks and processes it takes on are repetitive and mundane. Those processes may be considered as lacking in enough value to warrant automation via a new core system.

However, robotic process automation software can communicate with and learn from existing IT applications. As a result, there is no need to implement brand new systems, meaning RPA is both cost-efficient and effective.

All RPA platforms, regardless of the software provider, comprise of a few basic functions that build the ‘robot’.

The Benefits of Robotic Process Automation in Accounts Payable

Accounts payable automation using RPA has the potential to completely transform the invoice processing landscape, given the number of repetitive, manual tasks that exist within AP.

Many AP teams are already experiencing this transformation; however, several challenges still exist within the AP process for those yet to embrace RPA. A recent report by Levvel listed manual data entry and inefficient processes, as well as invoice to payment matching as the biggest challenges.

With robotic process automation in accounts payable, finance professionals avoid manual tasks, leading to many benefits including the following:

The process of invoice data capture is greatly improved through robotic process automation. With manual data capture, the monotonous and intensive nature of the task inevitably leads to occasional mistakes in the data entered into an AP system. Such errors can prove to be particularly costly. However, RPA, having been programmed to look for specific information, operates error-free.

Additionally, with all relevant data captured successfully during the invoice matching stage, exceptions are kept to a minimum. RPA systems can be programmed to match invoices at all levels, so if the data is correct, the invoice will be passed on to the approval stage without any hold-up.

Sometimes, when operating under manual processes, the person who creates the PO holds up the overall process by forgetting to confirm receipt of goods/services. However, with robotic process automation, an automatic alert is sent to the PO creator when the PO is missing, meaning any hold up in the process is kept to a minimum. Setting up an automatic process improves accountability and creates an easy-to-follow audit trail.

Operational efficiency now stands as the number one priority in procurement and for good reason. Most organizations have complicated invoice approval workflows in place, meaning that an invoice has to go through a number of people and checks before it is fully signed off and a supplier is paid.

When processed manually, invoice approval exposes a number of inefficiencies. For example, invoices can go missing or may sit on someone’s desk or in their inbox for longer than necessary, which slows the process down considerably.

However, a robotic process automation system can manage a pre-configured invoice approval workflow and remove many of the inefficiencies that exist. With relevant invoice approvers assigned, RPA can then automatically route the invoice to each approver, at each stage of the workflow, prompting them to approve or decline.

Given set deadlines for invoice approval, an RPA system will request approval again if the approver has failed to do so at the initial stage. If this also fails, RPA will then re-route the invoice to another pre-configured approver, if such instructions have been set. In fact, a Levvel report indicates that quicker invoice approval is the top benefit of AP software utilization. 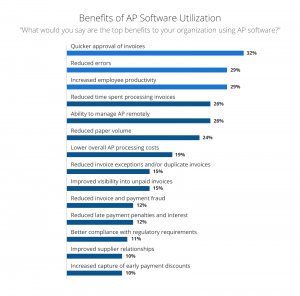 Thanks to RPA, AP staff no longer have to chase down approvers for invoices or manually enter data and examine exceptions at the data capture and matching stages. AP teams now have the opportunity to focus more of their time towards customers and other higher value tasks. This, in turn, can boost morale and enhance career development.

According to a Deloitte survey, 76.4% consider reducing costs the top procurement priority while digital transformation is close behind at 76.1%. Given this trend, robotic process automation will become central to business strategies.

Many invoice data entry and matching responsibilities were previously outsourced, but organizations can make significant savings by implementing one single RPA system to take on those roles.

Also, with the typical invoice lifecycle greatly reduced as a result of using RPA in accounts payable workflows, organizations can benefit from early payment discounts offered by suppliers. Companies also avoid paying late payment penalties, which can be common when operating manually.

Robotic process automation greatly improves the speed of invoice approval, which provides a shorter time frame for things to go wrong with suppliers. With manual processes, sometimes when there is a delay with a payment and the supplier is not informed, they may assume that the invoice has gone missing and choose to send it again. This can leave organizations vulnerable to paying the same invoice twice.

However, the shorter invoice cycle that RPA delivers reduces the chances of this happening. Additionally, with both the procurement and accounts payable teams, along with suppliers operating within the same system, the status of an invoice is visible at all times.

With cost savings, improved efficiencies, and greater compliance some of the main benefits associated with RPA, it’s easy to see why near-universal adoption is expected in the next few years.