SoftCo would like to extend its sincere congratulations to pro golfer and  SoftCo ambassador, Chesson Hadley, on securing his PGA Tour card with an exciting win at the LECOM Health Challenge on Sunday. Hadley finished with a tournament-record 23-under 265 total on Peek’n Peak’s Upper Course. He jumped from 22nd to fourth on the Web.com money list, more than sufficient to ensure a return to the PGA Tour as a top-25 finisher.

A former PGA Tour Rookie of the Year with four top-ten finishes in his debut season, including a maiden PGA Tour win at the Puerto Rico Open in 2014, this is a long-awaited and hard-earned return to the top flight. The 30-year-old from Raleigh, NC, maintained steely composure in his final round, chipping in for par at 16 and nailing a birdie on the 17th to claim an emotional one-shot victory.

“Chesson is a great ambassador for SoftCo and we are delighted that he has regained his place on the PGA Tour. We would like to congratulate Chesson and his family and he is undoubtedly a star of the future.” 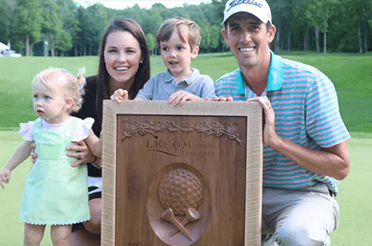