Fun day at the launch of SoftCo10

To celebrate the launch of our new, powerful platform SoftCo10, we were delighted to welcome All Blacks legend and our new Brand Ambassador, Dan Carter, for a series of fantastic events in Dublin.

To kick off the day’s events, Dan Carter was joined by Ireland’s own, Ronan O’Gara, for a charity game of rugby golf in what was the ultimate battle of the fly-halves. The game was in support of two amazing charities with the SoftCo Foundation supporting Our Lady’s Children’s Hospital, Crumlin represented by Ronan O’Gara, and Guy’s and St. Thomas’ Hospital cancer research facility in London, represented by Dan Carter.

Set in the spectacular Dun Laoghaire Golf Club and surrounded by huddles of people, the sporting legends remained cool, and showed us why they are heralded as two of the best number 10s ever to play the game of rugby. The game was played over 4 holes with Dan Carter holding his nerve on the last hole to clinch a one shot victory over Ronan O’Gara.

The next stop was SoftCo HQ, where Dan met the SoftCo HQ team before moving on to St. Mary’s Rugby Club for an exclusive Q&A session presented by Niall Rynne, Vice President of Leinster Rugby. The Kicking Masterclass was the perfect end to a fantastic launch day, where Newstalk FM competition winners and friends of SoftCo got the once-in-a-lifetime opportunity to learn from the greatest fly-half in history.  The Henry McKean Newstalk Drive interview is available to listen to here.

“We had a great day of celebration and our thanks to both Dan and Ronan. We would also like to thank both Dun Laoghaire Golf Club and St. Mary’s RFC for their fantastic hospitality.” 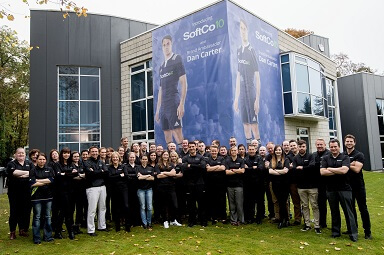