SoftCo, the leading provider of finance process automation solutions, welcomed Kyle Good and Nikki Evans, of Hermes and Monkstown Hockey Clubs to mark the major successes that both clubs have enjoyed this year. The clubs merged to become Hermes-Monkstown and have achieved phenomenal success in recent times.

This was particularly evident at the Olympic Games in Rio de Janeiro this summer, where Kyle Good, joined by Monkstown teammate David Fitzgerald, represented Ireland. It was the first time in 108 years that an Irish men’s hockey team competed at the Olympics.

Hermes is also significantly represented at international level. Currently, Nikki Evans is one of the five Irish internationals that the club currently boasts along with Anna O’Flanagan, Chloe Watkins, Naomi Carroll, and Sinead Loughran.

“We have been proud sponsors of Irish hockey for many years and are thrilled to watch the now merged Hermes and Monkstown teams continuing their great success on hockey pitches here at home and internationally.” 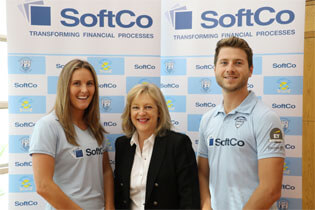