On Wednesday, 7 February, SoftCo hosted a kicking masterclass with rugby legend and SoftCo Ambassador Ronan O’Gara. The event took place at Donnybrook Stadium in Dublin and was attended by some aspiring young rugby players and their families. The attendees witnessed some of the secrets that Ronan has used throughout his career followed by a lively Q&A session.

Ronan O’Gara is Ireland’s all-time leading point scorer, scoring 1,083 points for Ireland over 14 years and he is the most capped player in Heineken Cup history. He recently joined Super Rugby side Crusaders as assistant coach and was back in Ireland to cover the first two games of the 6 Nations campaign. O’Gara is set to return to New Zealand for the first game of the Super Rugby season on 24 February against Chiefs.

“Everybody had a great day and there was a lot of knowledge shared. We’d like to thank Ronan for taking the time to help the youngsters and wish him the best of luck with his new coaching position in New Zealand.” 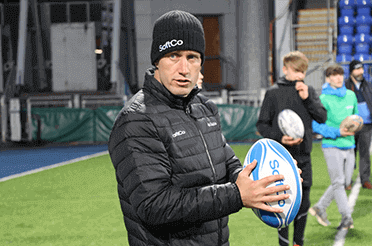