According to a recent report by Palkeet, The Finnish Government Shared Services Centre for Finance and HR, invoice processing automation levels are nearing 70%, following the implementation of SoftCo Procure-to-Pay in January 2019.

The report states that the Ministry of Transport and Communications (LVM) are now automatically processing 69% of their total invoices, while Palkeet have also significantly increased their automation levels to 61.6%. The Finnish Tax Administration (Vero) and the National Land Survey of Finland (MML) are other notable entities experiencing increased levels of automation.

“One of the goals of the Handi program is to achieve significant growth in the degree of automation of invoice processing. There is still plenty to do, but there is already 70% automation at the top.” @HandiOhjelma @PalkeetFi

In 2017, SoftCo Procure-to-Pay was chosen by Palkeet, following a competitive tender process, as the most comprehensive solution to centralize and transform the Finnish Government’s entire procure-to-pay process and achieve significant levels of automated invoice processing.

Throughout the Finnish Government, over 1.2 million invoices are processed each year at a total value of over €18 billion.

The Finnish Government aims to save €100 million as a result of digitizing public services. It also aims to reach a level whereby 90% of invoices are processed automatically.

We are delighted to see the levels of automation that this project is delivering for the Finnish Government at this stage and the savings that are being made. With 53 of the 70 Finnish Government entities now live on SoftCo Procure-to-Pay and the remainder set to go live by the end of Q1 2020, we look forward to seeing automation levels grow to even more significant heights. 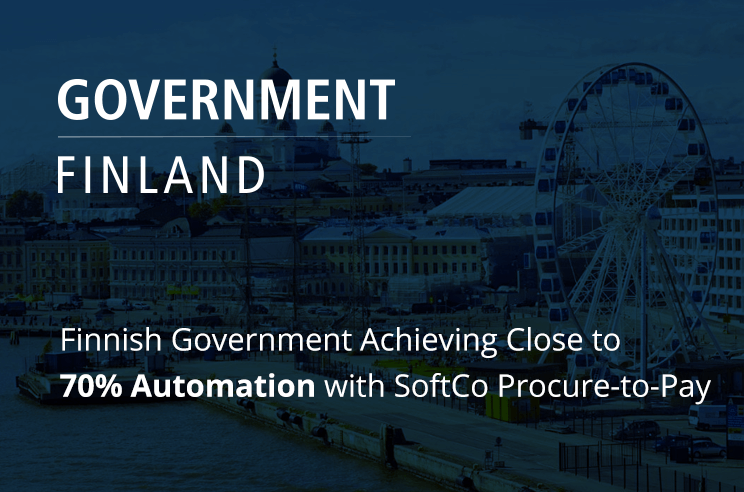